The sequel to Stasi Vice 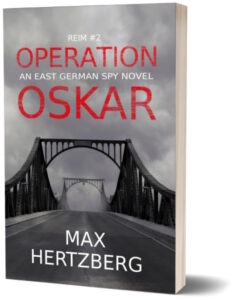 For those of you who can’t wait to find out what happens in Operation Oskar, here’s a short preview.

My comrades love a good question, maybe that’s why they were asking me again. And again.

OK, I know what you’re thinking. Why didn’t I just answer?

But I’d already answered. I’d given them my answer this morning. And yesterday. And the day before.

And guess what? They were still keen to hear what I had to say.

I knew the procedure, I knew what to expect—I’d been on the other side of that table many times. I’d heard the lectures at the Ministry school in Golm and I’d read the manual. But this time I was in the hot seat. Knees closed tighter than a nun’s, hands pressed under my thighs, palms pushed against the seat. No sleep for two days. Or was it three? Couldn’t really tell whether the hallucin­ations were from alcohol withdrawal or lack of sleep.

So I gave them my answer again: “I was in my office, opening a preliminary file on a potential informant in Potsdam. The gate records will confirm that I spent the whole night at the headquarters of Main Department VI in Treptow.”

The Stasi major sitting behind the desk didn’t react. Didn’t even bother looking up from the sheet of questions in front of him, just read out the next one from his list.

I didn’t need a sheet of paper in front of me, I knew which question was next because he’d already asked me, as had the interrogator before him, and the one before that.

The shifts changed. The faces opposite me changed. But I stayed right where I was, and that list of questions stayed right there on the desk.

Every day or so they let me go back to shiver in my cell, just for a bit of variety. My cramped legs struggled to carry me down the cold corridors, my hands were shackled together and my head was lowered.

I couldn’t see much. The traffic light system was above my line of sight, my vision topped out at the thin wires strung along the walls at shoulder height.

I thought about reaching out, pulling the fine wire before my guard could react. Break the electrical connection and the alarm would go off, more screws would turn up, truncheons ready for action. Surely the pain and the bruises would be better than this monotony?

Just for a bit of variety.

They were having a hard time deciding whether my dead Boss was a hero or a traitor and they expected me to help them work it all out.

Everyone else who could help was either dead or in the West. Either way, they were out of reach.

Fair enough, it was going to take them a bit of time to figure it out: all they had was the Boss’s corpse with a big hole in the chest where a bullet had been dug out of it. They didn’t know who had killed him.

But that wasn’t the important bit.

They wanted the why. If they knew why he’d been killed they’d know whether he was a class-hero or a class-traitor.

Once the brass agreed on the why they might declare him a hero—just for the propaganda value—even if they’d decided he was a traitor.

And me? I couldn’t care less whether my dead Boss was a hero or a traitor. I only cared what the comrades thought. The interrogation notes would be sent to Berlin Centre, and one day the verdict would come back.

If the bigwigs decided the Boss was one of the bad guys then I was as good as dead.