As the author of various novels set in East Germany I’ve been asked a fair bit about Deutschland 83 over the last few weeks – mostly about whether or not the series is at all realistic. The series is a fun but unreliable witness to both East and West in 1983, but in this post I shall be outlining how Martin Rauch would have been recruited in the real GDR of 1983.

You may also like:
Stasi Tactics: a look at how political activists in the GDR dealt with Stasi informants and infiltration.

This post isn’t a critique of Deutschland 83: the distressing historical inconsistencies and continuity errors will be overlooked (so no giggling about the fact that Schweppenstette has made himself very much at home in the suite of the big boss, General Mielke, at the MfS headquarters in Lichtenberg – understandably preferring not to hang out in the HV A operations centre deep in the woods east of Berlin).

How Martin Rauch really would have been recruited in the GDR 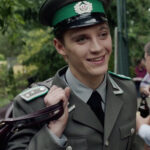 In the series Martin Rauch, an Oberfeldwebel (similar to staff-sergeant) in the Border Troops of the GDR is forcibly and violently recruited by General-Major Schweppenstette of the HV A (foreign intelligence service of the MfS – Stasi). Schweppenstette and Rauch’s own aunt Lenora run the Werbung (recruitment talk) without any prior preparation at Rauch’s home, with his mother in the next room.
After being abducted Martin wakes up in Bonn (in West Germany), and is given just two weeks training before being sent into an operational situation observing the Bundeswehr General Edel.

What procedures would the HV A have used to recruit Rauch?

The first thing to note is that the very first scene tells us that Martin was already a Stasi officer(!) From 1970, immigration officers on border checkpoints (Paß- und Kontrolleinheiten) wore Border Troops uniforms but were actually assigned to Stasi Main Department VI. We’re going to have to ignore this fact because the whole premise of D83 is that Martin Rauch is still a (relative) innocent. So for the duration of this post, let’s just forget that Martin was already a Stasi officer and pretend that he’s ‘merely’ a border guard.

The second thing to note is that an operation such as this would likely have been planned and prepared many years in advance, and the HV A’s first choice would probably have been to recruit a West German rather than insert an agent from the East. There are more than a few parallels in the storyline to that of Rainer Rupp, a West German student radical who was persuaded by the HV A to join the army. Rupp provided intelligence from NATO HQ in Brussels in the 1960’s and 70’s.

If the HV A were to use a home-grown agent then the procedure would likely to have been closer to that of the case of Günter Guillaume, who, after leaving the GDR under cover of being a refugee played a long game to become personal assistant to Willi Brandt, the West German Chancellor, after a period of 16 years.

But, for the sake of argument, if neither of the above possibilities were open to the HV A, just how would they have recruited Martin Rauch?

In many ways Schweppenstette and Lenora’s initial work would have been made much easier by the many happy coincidences in Rauch’s life. He was a member of the Border Troops (GT), and even if he were a conscript he would have had to give his consent before being posted to this branch of the armed forces – he could have held out for a posting in the regular army divisions or the Bereitschaftspolizei (part of the armed forces but used mainly for public order policing duties). Furthermore he would have been vetted as part of his recruitment into the GT, and would have been the subject of regular reports from Stasi IM informants (statistically nearly every fifth member of the GT was an informant).

Indeed, judging by the political commitment he shows in the first episode of the television series it is likely that if he were not already an IM then he would have been regarded as a possible candidate, with all the preparation and observation that implies.

This all adds up to an awful lot of paperwork on Rauch that the MfS would already have had on hand. Throw in the fact that his aunt is not only Reisekader (a member of the group of people allowed to travel to the West) but is a significant Stasi officer too and we have even more files being kept on Martin, and these would go back to the time when Lenora joined up.

So from their files the HV A could have made an initial decision to classify Rauch as a Candidate IM, and opened an IM Vorlauf (Informant Approach file and process) in which further information regarding his suitability would be evaluated and filed. Part of that process would have been to assess the best way to recruit Rauch.

The recruitment procedure would usually (again this is a standard way to recruit informants, whether it’s done by the Stasi or the British police) require an explicit spoken or written commitment, and some kind of minor operation. The purpose of both of these is to bind the handler and the informant together in a relationship based on conspiratorial trust.

In the case of Rauch the process would likely have begun with a ‘confidential’ chat about politics with his prospective handler. At this point there would have been no doubts about his political reliability – if there had been then the candidature would have ended without Rauch even being aware that he had been considered as a potential informant. The only variable at this stage would have been whether Rauch would have agreed to work as an informant. The Stasi found no sure way to predict the reaction of the candidate, and many people declined to inform.

The MfS categorised the reasons IMs allowed themselves to be recruited:

In the MfS’s eyes the order of this list was also the order of preference – ideologically motivated agents are clearly going to be better than those who have been blackmailed.

Regardless of the reasons why any IM allowed themselves to be recruited, all intelligence and police services in the world (and through history) will attempt to manoeuvre the candidate into a position where they themselves make the offer to become an informant.

Given his personality and background it is fair to assume that the Stasi would hope that Rauch would allow himself to be recruited for reasons of ‘positive commitment’.

Rauch’s written statement of commitment would have followed, and a minor mission given, for example spying on his colleagues at the Border Regiment.

Once this task was successfully completed, further missions would follow, progressively ‘stress testing’ Rauch. At some point he would have been extracted (herausgelöst) from his position as Border Guard and given intensive training at the Gosen base, outside Berlin.

Only at this point would he have been sent over the border to the Operational Area (West Germany) to complete his mission, probably with the status of Hauptamtlicher IM (full-time, salaried informant).