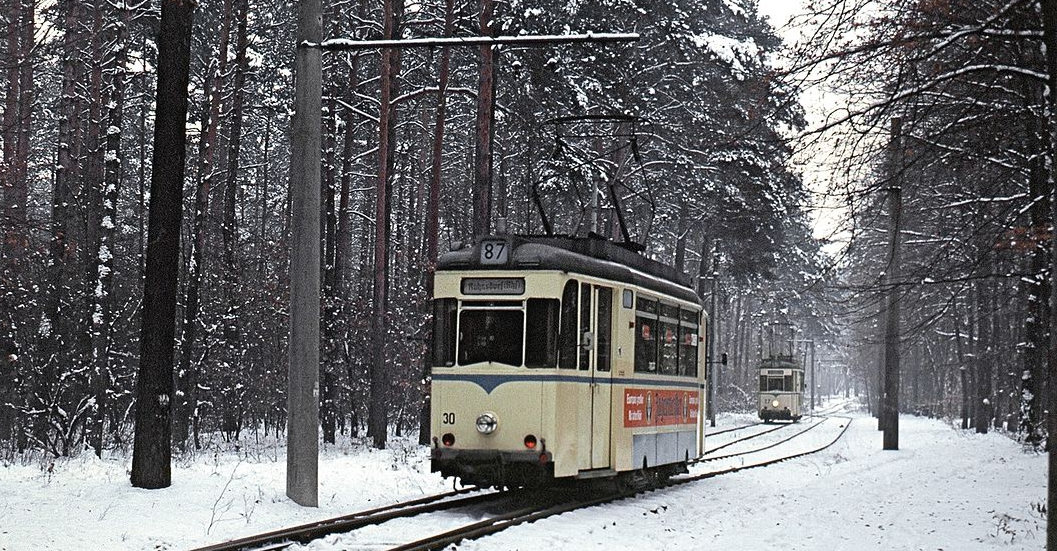 This tour heads through the forest where Martin met Dmitri, the KGB officer, in the first book of the East Berlin Series – a perfect antidote to city life if you’re feeling the need for some fresh air.

Accessibility: The S-Bahn station has a lift, however the old-fashioned tram is accessed by several high steps; there is no ramp available. The walk through the forest is along compacted earth paths – not rough, but can be sandy and uneven.

Start the tour at the Rahnsdorf S-Bahn station, exit the station and cross the road to the tram stop. The tramway is run by the Woltersdorfer Strassenbahn GmbH, which uses old-fashioned Gothawagen trams build in the 1950s. The tram first rattles through a couple of kilometers of woodland, before entering the small town of Woltersdorf, which is outside Berlin.

Just before the tram leaves the woods it passes through a passing point, you’ll notice the tram jolting over the points. Until the 1970s the tram stopped here and the passenger’s papers were checked by the police – before the Berlin Wall was built in 1961 these controls (which were on all access points to East Berlin, not just here) were intended to discourage those seeking to flee the GDR by crossing into West Berlin. But even after the Wall was built the checks continued, although more sporadically.

The passing point is also the place where Martin jumps off the tram:

I was in luck, the tram was waiting when I got off the S-Bahn at Rahnsdorf. I climbed aboard, pushing my ticket into the stamping machine and pressing on the handle on the top to punch a hole. I sat down at the back, thinking about the tram ride with Annette last night.

Only one other person got on, a middle aged man in a long brown coat and a trilby. He sat down in the front seat without looking around, content to stare out of the window, watching the people at the S‑Bahn station.

With a jerk the tram moved off. It was a rattly old thing. After a few metres it left the road and swerved into the trees, grumbling over track joints, jolting and shaking the whole while. I wanted to have a think, try to process the day so far. There was so much to think about, but the lurching tram made it hard to do anything but look out of the window. After about a kilometre of trees the tram banged over some points, the track making a small loop next to an abandoned hut. The man sitting near the front seemed to take this as a cue, knocking at the driver’s window—a knock like a policeman’s, a hard triple-rap. The driver clicked open the door, and the man leant in, saying a few words. The tram was rattling too much for me to make out any of the short conversation, but the man seemed happy. With large, confident strides he came down the carriage, pulling open the rear door.

Woltersdorf is a pretty little village, but its main attraction lies at the end of the tram line: the lifting bridge over the lock and the canal that links the Flakensee and the Kalksee. There are several beer gardens on the canal and the two lakes, and in good weather a glass of German beer is often a good idea.

The Kranichsberg, rising nearly 100m above Woltersdorf lies just 1 km to the East of the lifting bridge. There’s a walking map just by the tram stop, or ask for directions.

If you climb up the Kranichsberg you’ll find a wooden tower, which will take you up another 25 meters (1,50 €). The tower was built as a tourist attraction in the late 19th Century, but was destroyed at the end of the Second World War. It was rebuilt in 1962, but then taken over by the Stasi in 1976 and remained closed to the public until the early 1990s.

Both from the hill and the tower you’ll have a wonderful view over the forests and lakes to the east, and of the skyscrapers and the TV tower in the city to the west.

The forests around Woltersdorf provide many pleasant walks, and several options for a return to Berlin (eg from Woltersdorf walk south west, catch the bus to Erkner and then the S-Bahn back to Berlin); or you can hire canoes in Erkner; and in Rüdersdorf, just to the north of Woltersdorf you’ll find the Museumpark – an open air museum on the site of an old limestone quarry.